“Once I overcame breast cancer, I wasn’t afraid of anything anymore.” Melissa Etheridge

I have always been diligent about getting my mammogram every year. I can’t say the same for breast self-exams. Sometimes I

remember. Most times I don’t. I had the same gynecologist for years and I trusted that he would find something if it was there. If not, the mammogram would catch it. That worked great until I was in my early forties and had a hysterectomy. I was informed I didn’t need to continue with the gynecologist because I didn’t have any lady parts. Then I discovered my regular doctor didn’t routinely do breast exams. Still, I had that mammogram religiously and thought I was good.

Five years ago, my husband died suddenly. His insurance was immediately stopped and I was put on COBRA. Something I did not know at the time…when you go on COBRA, you get on at the same level of coverage you had on your regular insurance. My husband worked for a Five Star hotel with platinum benefits. And on COBRA, that translated to big bucks. What money I did have quickly dwindled and I was faced with a medical crisis many women run into when they are widowed. I was too young for Medicare. Grief rendered me useless in my career field and I essentially “retired”. I tried getting private insurance, but was turned down for pre-existing conditions. Thank goodness the Affordable Healthcare Act became available and I was finally able to get healthcare. Still, it was expensive so in order to keep the cost down, I was forced to choose a plan with a very high deductible…over $7,000. Needless to say, anything routine went out the window. 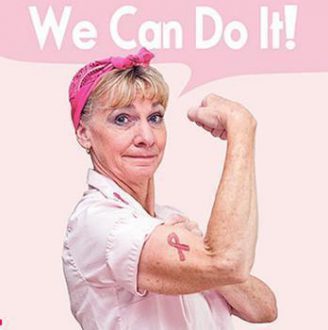 I turned sixty-five this June and was never so glad to see anything as I was that Medicare card when it came in the mail. I started making appointments to catch up with routine healthcare that I had been putting off. That’s when they found the lump. It had been at least three years since my last mammogram. I was horrified. I was quickly scheduled for a needle biopsy and the results came back “inconclusive”. My surgeon advised we do a surgical excision biopsy just to be sure and get this behind me. Two weeks later, I had the offending lump removed and it turned out to be a fibroadenoma. Benign. To my very great relief, I thanked God for this blessing. Unfortunately, not everyone gets such good news.

I was recently introduced to Becki, Sister #4857. Becki is no stranger to cancer. First, she had colon cancer and had her colon removed. In case you don’t have an understanding of that, it’s a huge surgery that leaves you permanently connected to an ostomy bag to collect stool. Then, three days before Christmas in 2012, she was diagnosed with breast cancer. She had a lumpectomy on January 2nd and started Chemo on January 15th. She went through five months of chemo, finishing at the end of May. She had a month off then started radiation in July and finished on her birthday in August. Then, unbelievably, after her breast cancer treatment was completed, she found out she had cervical cancer. A total hysterectomy took care of that, fortunately.

“Of the three cancers, breast cancer was the fighter.” Becki said.

Becki is five years out, cancer free and she says it’s the best feeling. Now, her main focus is making sure other women get their mammograms because early detection is key. She threw herself into helping other women. She is a board member of a local charity called Tina’s Angels. They are a make a wish foundation for breast cancer patients, their families and survivors. 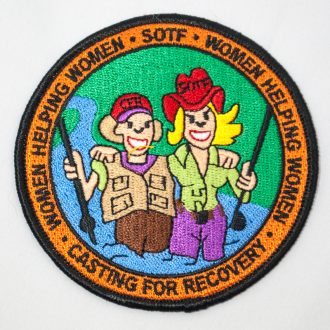 “Breast cancer patients are very proud,” says Becki. “Most are women and they can’t just stop living and taking care of everything. Tina’s Angels gives these women and their families the opportunity to take a break from cancer and their treatment. We find out what they would like to do, where they would like to go and we make it happen. We’ve sent women to the beach, on a houseboat in Cumberland, concerts of their dreams, paid their bills so their utilities wouldn’t get turned off. Whatever makes their lives easier and gives them a break.”

Each year, Becki tries to coordinate some sort of fundraiser to raise money for Tina’s Angels. The first year she had cancer, she had a big party to celebrate the end of treatment and raised almost $500. The next year she had a charity car show and raised $2500. She has had four car shows since. The biggest and best event she had was a charity auction at the SOTF Buckeye Bash 2017 where they raised $3700.

“There were thirty-two bidders and their kindness had me in tears. Each Sister donated an item for the auction.” Becki said.

Becki had just had her hysterectomy, her third bout of cancer, when she went as a Sister on the Try with her neighbor. In her frame of mind, it was time to live life to the fullest. She says it was the best thing she has ever done for herself and she has never looked back. Becki and I don’t live all that far apart so we are going to get together one of these days and share a campfire.

One of the main charities Sisters on the Fly supports is Casting for Recovery. This charity “provides healing outdoor retreats for women with breast cancer, at no cost to the participants.” These retreats offer opportunities for women to find inspiration, renew energy, and connect with other women and nature. All ages, all stages, Casting for Recovery has been helping women from all walks of life for over twenty years.

A wise Sister takes care of herself in every area…physically, mentally, emotionally, spiritually. So, get out there and get the sisters checked, Sister! We want you around for a long time so we can have more fun than anyone!

With much love and gratitude,
Ginny