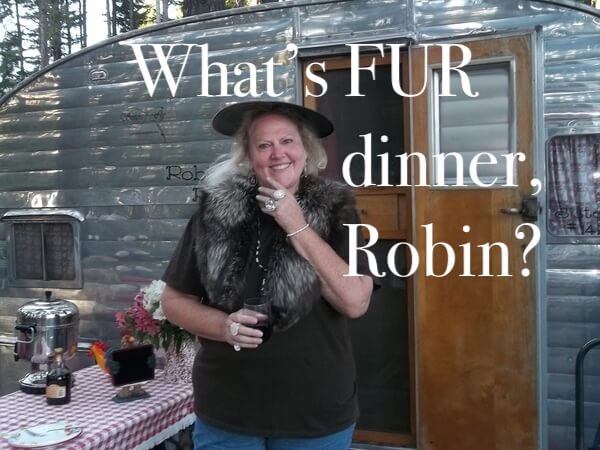 Sister #1470, Robin Maillet, joined SOTF in the spring of 2009, just months after losing her younger and only biological sister to cancer.  Robin has often stated, “It took 1,469  “sisters” to fill the hole left by the ONE I had to let go”.   In the 9 years since joining, Robin has never regretted a minute and has said she doesn’t know how she ever made it in life without some of the women she has met.

Robin lives in Washington State and has served in numerous capacities for SOTF including WA/OR Meetup  Founder,  Pacific 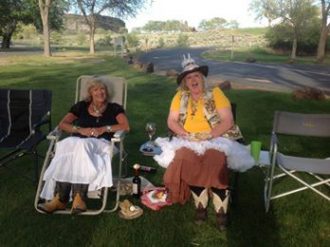 Northwest Financial Wrangler, Oregon Wrangler,  Western Washington Wrangler and National Cabela’s Wrangler.  Robin was the hostess for the 2013 Northwest Gathering in Long Beach, WA where just under $45,000 was made via auction and donated to a local charity called Camp Victory.

Dealing with adversity is nothing new to Robin.  She has dealt with great tragedy in her life from losing her only son, husband and sister all within 3 years of each other, to surviving two bouts of Stage 3 Melanoma, to working 35 years in a “mans world-” construction- to living in Washington State where you gotta learn to camp in the rain if you want to camp!

Robin’s first trailer was a 1956 15’ Aloha named “Robin’s Roost”.  She was asked once why her staging was all roosters and no hens when she was female.  Her response was “there’s only room for one hen in this trailer!”.  Robin’s Roost followed Robin around for thousands of miles, providing a soft place to land after a full day of play. 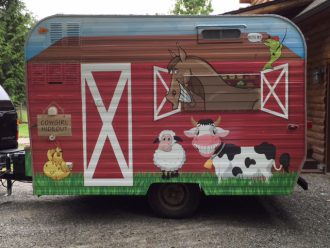 Robin’s second trailer was a 1965 9’ Santa Fe named Cowgirl Hideout.  Having been raised on a farm, Robin loved time spent in the barn with all her favorite animals.  Cowgirl Hideout has a vinyl wrap to look like a barn with comical animals on all 4 sides.

The maiden voyage with Cowgirl Hideout was from WA state to southern CA back in 2016.   Within the first few miles of towing, Robin felt something wasn’t quite right.  Knowing her other half, Guy (then a truck driver) was on the road, she phoned him just to toss out ideas and get some feedback about why things didn’t feel right.  Come to find out, they were only about 8 miles from each other, both headed south on I-5.  Guy was in the lead so he pulled over at an off ramp and 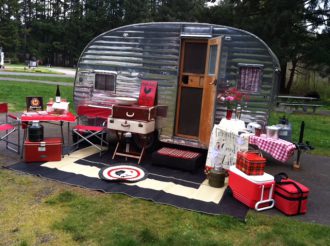 waited for Robin to catch up.  After thoroughly checking weight distribution, loading, weight on the tongue and discussed speed – it was concluded there was no visible reason things weren’t safe.  Back on the road, this time Robin (and Cowgirl Hideout) in front of Guy (in the semi) so he could “watch” things.  Communicating back and forth – increasing speed, changing lanes, assurances given and best wishes for a safe and fun trip to SoCa – when Robin found herself jerked in her seat, a trailer leaning in her side mirrors, sparks flying behind her and the immediate thought of “he knows I’m in trouble, he can take care of himself” as she pulled in front of the truck and to the side of the road as quickly as possible.  Once stopped, Guy ran up to the tow rig only to find her with her head on the steering wheel when he asked “Are you okay?  Wow – you did a great job keeping things upright – can I get you anything?” to which Robin responded “maybe a clean pair of pants”. 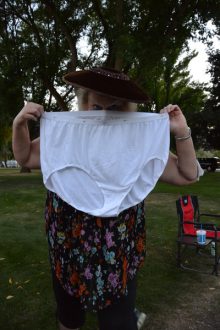 Within a few minutes a WA State Trooper pulled up and said “I saw your tire back up the road – I’ll go get it for you”.  Funny part of this story – Guy had to get back on the road since he was working, and knowing the trooper had called for a tow truck and further knowing Robin could take care of herself, he leaned over to kiss her goodbye and climbed back up in his truck to leave.  The trooper stood there with his mouth open and finally looked at Robin and said “do you know that trucker?”

This was a freak accident – the lug nuts and stems were still on the trailer axle but the tire was a half mile behind.  The wheel had somehow “whirred” 2” holes at each stem allowing the tire to slide right off, over the nuts.  It took 4 days to get a new axle, wheels, tires and a temporary straightening of crumpled sheet metal – but Robin got back on the road and drove non stop to catch up with all the fun at the end of the Route 66 SOTF event.

Throughout the years, Robin has bought and sold several trailers and currently camps in a 2017 RPod 180 appropriately named Cowgirl Palace (in comparison to Cowgirl Hideout).  Within the next few weeks, Robin should get her 1963 22’ Boles Aero trailer back from being completely renovated and hit the road for the summer of 2018.  Unfortunately, this summer will be a little quieter on the camping front because Robin had bilateral knee replacements in January and time off from work is at a premium.

Safety is extremely important to Robin.   Having worked around heavy industrial machinery in her teens and early 20’s, Construction Job

sites for 35 years and now spending as much time as possible pulling around a little trailer she knows that accidents happen – and sometimes there is nothing you can do about them BUT………she also knows there is so much more you can do to be safe not only for yourself but others.   With this in mind and meeting so many sisters who had never towed a trailer, Robin created a small handout and began conducting “Trailer 101 Safety Classes”.  Each class has taken on a different “feel” but the most important thing is that each attendee take away something that contributes to being a little safer on the road.  SOTF does have more fun than anyone but Robin teaches  “you need to be a woman behind the wheel and a girl in the campground!”

Robin lives with her “Other Half” Guy on a small hobby farm outside McKenna, WA where they have raised Scottish Highland Cattle, Pygmy goats, chickens, ducks, sheep, pigs, rabbits dogs and cats.  Just recently, effort has been made in paring down the farm in preparation of selling and relocating.  Retirement is just around the corner.  Robin dreams of buying a diesel pusher and set out across the US but Guy says after driving truck all these years that is about the last thing he wants to do.  I wonder how Guy will like living by himself because, knowing Robin – she wouldn’t hesitate a minute of getting that diesel pusher and heading out by herself.